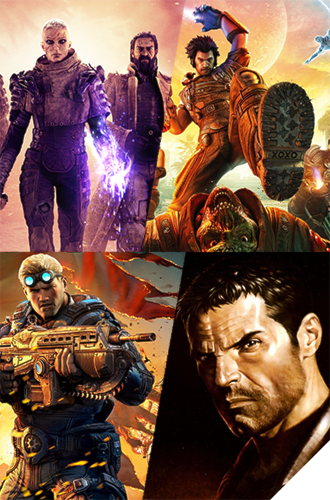 People Can Fly, one of the most experienced developers of AAA games in Poland, intends to debut on the Warsaw Stock Exchange this year

Warsaw, 1 September 2020 — PCF Group S.A. (People Can Fly) filed the prospectus with the Polish Financial Supervision Authority. The company is planning to hold a public offering of shares and make its public debut on the Warsaw Stock Exchange (IPO) by the end of this year.

People Can Fly, a globally recognized developer of AAA games, intends to join the growing group of gaming companies listed on the Warsaw Stock Exchange. Games developed by People Can Fly include award winning titles acclaimed worldwide by gamers and media, such as Painkiller, Bulletstorm and Gears of War: Judgment. Additionally, during its eight-year-long partnership with Epic Games — a global developer and publisher of games and related technology — People Can Fly cooperated on the development of such titles as Gears of War, Gears of War 2, Gears of War 3, Unreal Tournament, Spyjinx and Fortnite. People Can Fly’s technology backbone is based on Unreal Engine — a popular game development engine created by Epic Games.

In cooperation with the global publisher Square Enix, People Can Fly is currently working on the largest production in its history — an RPG shooter Outriders, scheduled for release towards the end of 2020.

The company has also recently commenced the development of a new AAA game, among other things. As in the case of Outriders, this production will be executed in cooperation with a leading global game publisher. The game is intended to be released on next-generation consoles and streaming platforms and is developed by People Can Fly’s studio in New York. In order to match the scale of the new project, People Can Fly is planning to significantly expand its New York branch over the next 12-18 months, and is additionally expanding its start-up studio in Montreal.

“People Can Fly has a long record of successfully developed AAA games and experience in cooperating with the leading global publishers. The public listing of the company is an important step forward that will strengthen the People Can Fly’s position on the global market of top-tier game developers. We are proud to say that we have one of the most experienced teams in Poland which includes approximately 190 experts and specialists in the fields of software engineering, animation, graphics, design, visual and sound effects, as well as game production. It should be emphasized that some of the company’s shareholders are the key managers responsible for the development of the company’s projects, associated with the company for years: Bartosz Kmita, Bartosz Biełuszko, Krzysztof Dolaś and Jarosław Surowiec. We are a global company with studios in Poland, the UK, USA and Canada, and we are recognized as one of the pioneers on the Polish and European market for AAA shooters. Our best recognized franchises include: Painkiller, Bulletstorm and Gears of War: Judgment, created in cooperation with Epic Games” says Sebastian Wojciechowski, president of the management board and majority shareholder of PCF Group S.A. “Currently, together with Square Enix, we are finalizing work on a new AAA game, an RPG shooter called Outriders. It is the largest production in the history of People Can Fly. We have high hopes for the worldwide release of Outriders later this year” adds Sebastian Wojciechowski.

Outriders is a highly ambitious third person shooter with RPG elements, set in a dark science-fiction universe. The publisher of Outriders is Square Enix, a global holding company headquartered in Tokyo that develops and publishes games around the world. Its portfolio includes universally recognized franchises such as Final Fantasy, Life is Strange, Tomb Raider, Just Cause, and Marvel’s Avengers. Inon Zur, the world-famous composer of music in games such as Dragon Age, Fallout, Prince of Persia, Siberia, and Baldur’s Gate, has composed the orchestral score and music of Outriders. Inon Zur is an Emmy Award winner and a three-time BAFTA nominee. The official game trailer is available at https://outriders.square-enix-games.com/en-gb/

“Outriders provides hours of immersive gameplay. Those who participated in our media events and had an opportunity to test-play Outriders, rate the game very highly. We are convinced that players around the world will appreciate it, and that it will open a new chapter in People Can Fly’s history” says Bartosz Kmita, creative director and one of the shareholders at PCF Group S.A.

An intense marketing and promotional campaign for Outriders has been conducted since the beginning of 2020 together with the publisher, Square Enix. Game presentations at press events in Warsaw (January 2020), Los Angeles (February 2020) and the PAX EAST 2020 conference in Boston at the turn of February and March 2020, generated great interest across the media landscape. In the first quarter of this year, Outriders generated almost 650 articles in the most prestigious media outlets around the world, as well as 260 videos that have been viewed more than 15 million times. Marketing activities for Outriders will continue throughout 2020 and will include the Outriders Broadcast format – monthly online events each presenting a chosen aspect of the game, promoted on the Twitch platform and the game’s YouTube channel which can be found here: https://www.youtube.com/outriders

The People Can Fly studio was established in 2002 and is one of the pioneers of shooter video games in Poland and Europe. It is one of the three most experienced Polish developers of AAA games. In 2007, the company’s majority shareholder became Epic Games — an American game development company and the creator of the Unreal Engine technology — a popular game development engine and the backbone of People Can Fly’s productions. Another milestone in the company’s growth was a management buyout from Epic Games in 2015 by Sebastian Wojciechowski, one of People Can Fly’s managers at that time and a member of the company’s management board.

One of the most important assets of People Can Fly is its international team of approximately 250 employees and associates, including about 190 professionals developing games in four studios and two start-up studios located on two continents, including a newly opened start-up studio in Łódź, Poland. Such a structure gives People Can Fly better access to top game development and industry professionals worldwide, and the ability to develop at least two AAA games simultaneously.

According to Superdata (Nielsen), in 2019 the premium segments games (AAA games) for PCs and consoles made up approximately 17.4% (USD 19 billion total) of the entire video games market value (USD 109.4 billion total). Superdata predicts that in 2020 the AAA games segment will be worth nearly USD 20 billion.

More about the company at:

Neither this document as a whole nor any of its parts are intended for distribution, whether directly or indirectly, within or into the territory of the United States of America, Canada, Japan, Australia or other jurisdictions where such public distribution of information contained herein may be subject to restrictions or may be prohibited by law.

This document is for advertising purposes only and should in no circumstances be used as a basis to make decisions on purchasing or subscribing for securities of PCF Group S.A. with its registered office in Warsaw (the “Company”).

This document is not an offer or an invitation to subscribe for or purchase any securities of the Company. The prospectus that has been prepared in relation to the public offering of the Company shares in the territory of Poland (the “Offer”) and the seeking of admission and introduction of the Company shares to trading on the regulated market (main market) operated by the Warsaw Stock Exchange (the “Admission”), when approved by the Polish Financial Supervision Authority (Komisja Nadzoru Finansowego), will constitute, together with all duly approved and published supplements and published updating announcements, the only legally binding document containing information on the Company, the Offer and Admission (the “Prospectus”). When approved by the Polish Financial Supervision Authority, the Prospectus will be published on the Company’s web site (www.peoplecanfly.com) and additionally, for information purposes only, on the web site of the Global Coordinator – Trigon Dom Maklerski S.A. with its registered office in Kraków (www.trigon.pl).

The approval of the Prospectus by the Polish Financial Supervision Authority should not be understood as an endorsement of the securities offered in the Offer or subject to the Admission. It is recommended that the potential investors read the Prospectus after it is approved by the Polish Financial Supervision Authority and published, before making an investment decision in order to fully understand the potential risks and rewards associated with the decision to invest in the securities concerned by the Prospectus.

Neither the Company nor any of its subsidiaries or affiliates assumes any liability for any losses related to a use of this document or any part or content hereof, or for any other reasons in relation to this document.