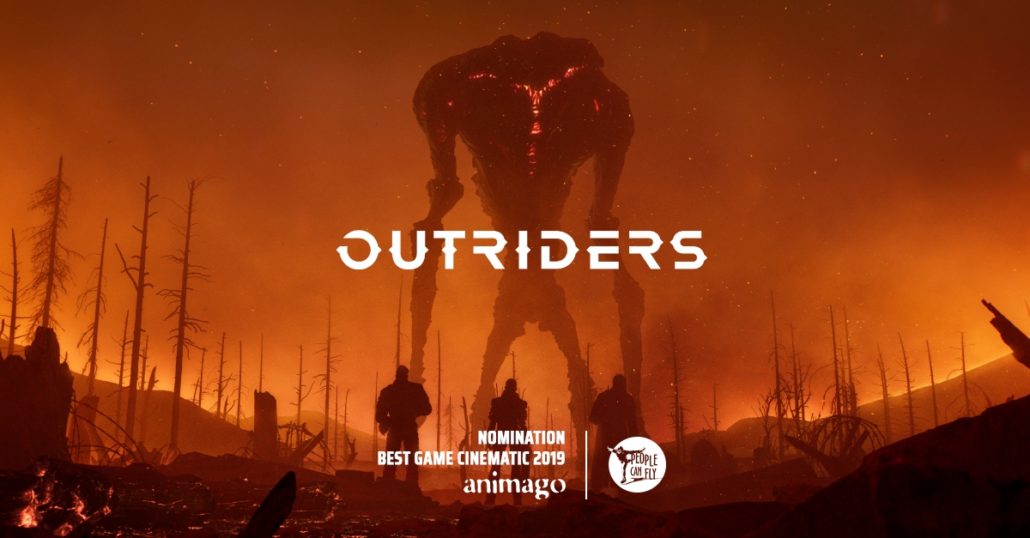 This year is a very special time for People Can Fly. We have finally revealed Outriders, our new AAA co-op shooter in collaboration with Square Enix, and we’re excited to show our fans what it’s all about later this winter. But before that, there’s some news we’re excited to share…

The Outriders Official Announcement trailer was nominated for the animago award for the Best Gaming Cinematic! We couldn’t be more proud that the video created to announce our new game, introducing the universe of Outriders for the very first time, is fighting for such an amazing award.

So, with that in mind, we’ve contacted our friends from Axis Animation – responsible for the nominated trailer to share with you guys a few things about the work they put in creating this astonishing work of art.

How many people worked on the trailer?

Full CGI trailers like these take quite a lot of hands to create. The final number of artists and producers involved in the project is around 50.

How much time does it take to create a trailer like this – from the first idea to the final version?

If I recall correctly the production ran around 4 months. There’s a fair amount of exploration in the early stages, and it kind of depends on the project type and length, but usually, 4 months is an average production time for a trailer.

What’s your process of getting to a final asset? Does the idea come from the developer/publisher or is the whole concept done by Axis?

It varies, sometimes the developer/publisher will have a very clear idea, and we would just execute. But Axis is a creative studio, and we thrive on being able to bring our own creative and direction, and more often than not we get to do that:) In the case of Outriders, we had a brief that was setting the basic requirements of the trailer, but we’ve also had quite a bit of freedom in how we wanted to portray the world that PCF games had built.

Is the trailer close to the atmosphere to what we will be able to experience in the final game?

In terms of atmosphere, I would say definitely so! All of the elements from the trailer are in the actual game, but without spoiling too much I would have to reserve my comment until you’ve seen gameplay.

From a conceptual and technical point of view – what was the most challenging part in creating the trailer?

From the conceptual point, I would say the most challenging aspect was crafting a trailer that gets the players intrigued in the game and world, but without revealing a lot of details and without saying anything about the story.

Did you have any other ideas that were scrapped? Can you tell us more about them?

Of course, it’s all a part of the process, and there were other directors with different ideas involved in the pitching process. I got to experiment with pre-visualization before we even started on the project and naturally, there were different versions and some things have changed, but I couldn’t mention anything specifically without revealing more about the game.

There are a few sections in the trailer (i.e. the female character shoots an energy blast) when the music becomes quieter and you can hear a very specific “bleeping” sound effect. Why did you choose to underline those particular moments?

It’s the sound of the “signal”. That sound effect in particular plays a big role in the story, apart from that can’t say anything else:)

What’s the difference between creating a trailer for a new IP and a sequel to a renowned game?

Well for me and most likely for the team, it brings the additional level of excitement because it is something completely new and fresh. And more often than not we get a higher degree of freedom and involvement, whether it’s by helping out in concept/design stage, or helping establish the rules of cinematography, or just about anything. It’s kind of a back and forth process, and I enjoy and appreciate that kind of collaboration with the publisher and developer.

What does the nomination mean to you?

I was always a big fan of classical cinema, and what it is in its truest form, is purely visual storytelling. In all of my work, I try to infuse as many metaphors and subtext as I possibly can, utilizing imagery rather than dialogue. I believe that this approach makes for richer and more meaningful viewing experience, one where you’re not spelling out everything for the audience, but inviting them to be an active participant and decipher what they’ve seen themselves. Seeing that a trailer with that approach got nominated for the best game trailer award means the world to me, and I couldn’t be happier with what we’ve accomplished!