Bulletstorm: Full Clip Edition arrives on April 7th and, as we’ve mentioned before, there’s lots of new content to enjoy. New Echo maps, the all-new Overkill campaign mode, and the upgraded visuals are just a few of the additions that make this the definitive Bulletstorm experience. On top of all that, we’re especially excited about the Duke Nukem’s Bulletstorm Tour add-on, which is free when you pre-order! With this add-on, you’ll be able to play the full Bulletstorm campaign as Duke, complete with all-new dialogue from the voice of Duke himself, Jon St. John! We’ve asked some of the people close to the project to help us delve a bit deeper into the idea of including Duke in Bulletstorm: Full Clip Edition — especially how and why it happened. As for the “where”? Well, we’ll get to that too.

Let’s start with the how — how does Duke Nukem end up in Bulletstorm? It all began with the goal of giving players something new, and rewarding players who support the game early by pre-ordering. Bulletstorm: Full Clip Edition is all about delivering brand new content and upgrades, but what about those players who pre-ordered? What could we do for them? The teams at People Can Fly and Gearbox Publishing began to toss around ideas. Gearbox Publishing Brand Manager Jeff Skal remembers: “The original idea was pretty simple: what if we gave the players an awesome Duke Nukem Multiplayer skin? But then we thought, ‘Why stop there? A skin? We can do better than that!’”

The idea grew and evolved until a skin became what amounts to an enhanced campaign experience — the story of Bulletstorm viewed through the eyes of The King himself. With that, the team at People Can Fly set about creating an entirely new Bulletstorm experience. The process wasn’t easy though, and as Jeff notes, these kinds of things can be tricky:

“Once we landed on adding Duke to the game, the next challenge was figuring out how all the pieces fit together. As you might imagine, there are some unique challenges that come to the surface when you try to swap out just about any protagonist with Duke — but especially when you&#39;re throwing him into an intense, personal story like Bulletstorm&#39;s.” 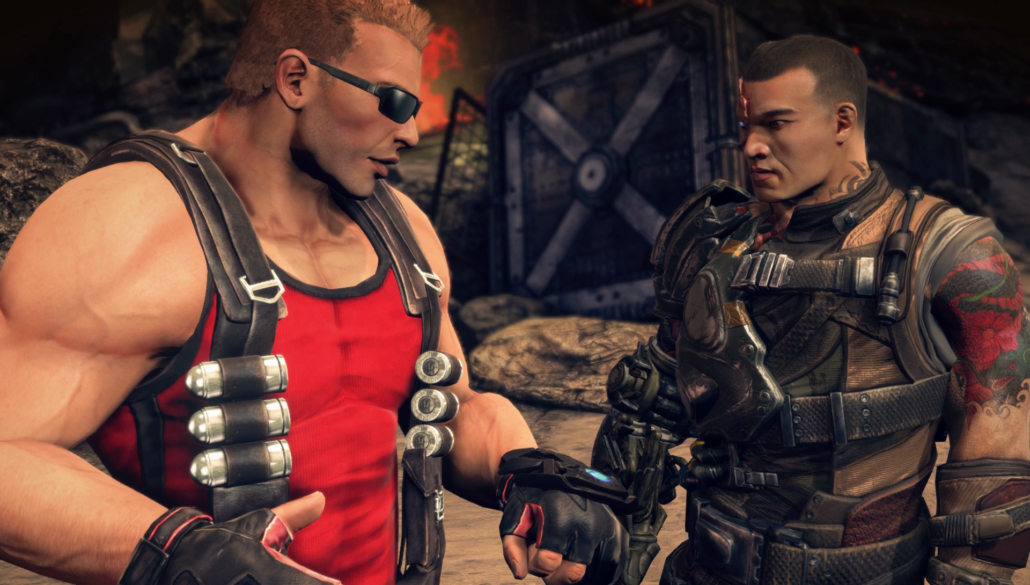 The idea seems unconventional, and it is. But when we really thought about it, it made so much sense. Duke Nukem and Bulletstorm are kindred spirits after all – both are “say whatever’s on your mind, action-packed, roller coaster rides”. On top of that, Duke knows a thing or two about being in hostile situations where only his wits and a giant gun stand between him and certain annihilation. Would Duke and the Bulletstorm crew play nice and get along? Only one way to find out.

Ultimately, the whole idea was to introduce even more fun into Bulletstorm: Full Clip Edition, and Jeff agrees, adding Duke is a great way to do that:

“The end result is pretty entertaining: He finds himself on this trippy journey on a weird planet, wondering why everyone keeps calling him &#39;Gray,&#39; and in typical Duke fashion, can&#39;t help but try to be the hero — dropping one-liners all along the way.” 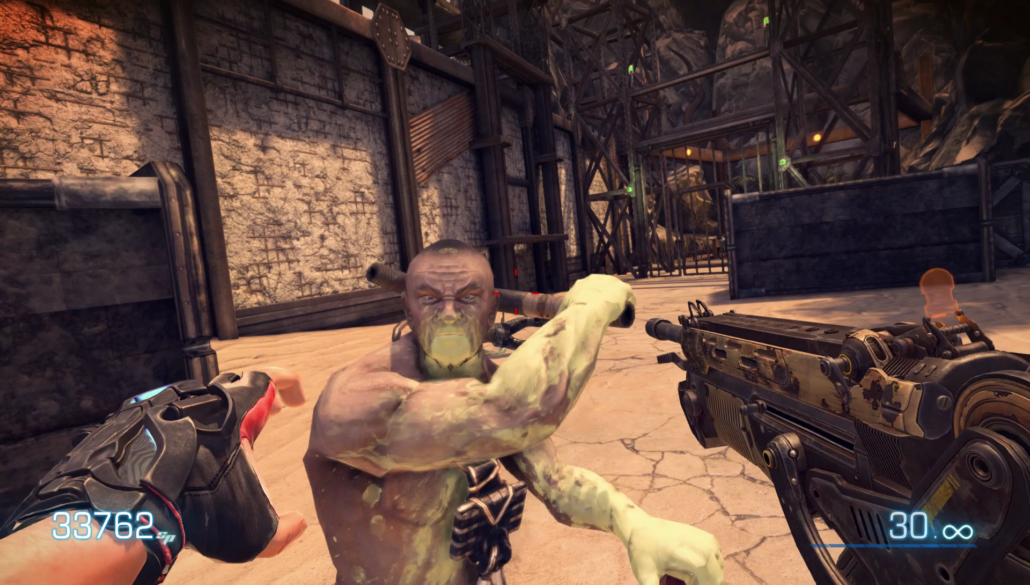 The simple answer to this question is “everywhere”. As we mentioned, Duke appears as a part of the Duke Nukem’s Bulletstorm Tour add-on, but this is more than just an add-on; this is your chance to play the Bulletstorm campaign as Duke. This means that Duke is truly everywhere, and with that all-new dialog we mentioned earlier, you can bet that there won’t be a dull moment. How happy are we to be bringing Duke Nukem to Bulletstorm? Take it from Jon St. John, the voice of Duke — “Happy isn’t even close…thrilled is more like it! It’s already one bad-ass game, and now that you can play it as Duke, it even bad-assier!” Those were our sentiments exactly, which is why Jon was tapped to record all-new dialogue that is quintessentially Duke. Jon recounts:

“I was very excited about it. In fact, after they showed me some actual gameplay and cutscenes where I heard the main character Grayson’s lines, I couldn’t wait to get into the studio and record some of those hilarious, and shall we say “colorful” lines myself!” 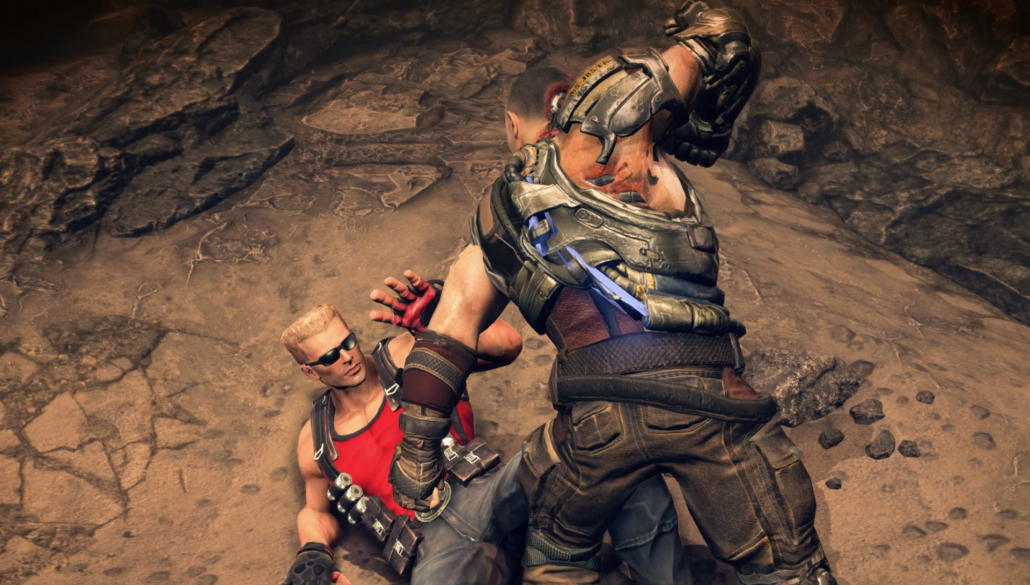 “Colorful” is a great way to describe Duke Nukem’s Bulletstorm Tour. Not only in terms of the dialogue, but also in the sense that playing as Duke puts a new spin on an already entertaining campaign. It’s a perfect example of why Bulletstorm: Full Clip Edition is more than just a remaster — it’s a reinvention. New content, newly updated visuals, and extras like Duke Nukem’s Bulletstorm Tour prove that this is absolutely the definitive Bulletstorm experience. Visceral, no-holds- barred gameplay is back, and now you can experience it as The King!

https://peoplecanfly.com/wp-content/uploads/2017/02/DukeBlog3.png 1090 1920 kbajan https://peoplecanfly.com/wp-content/uploads/2020/05/pcf-logo-black-new.png kbajan2017-02-21 13:43:292020-12-06 22:29:09The How, Why, and Where of Duke Nukem in Bulletstorm: Full Clip Edition
Scroll to top
This website uses cookies and similar technologies. By using this website, you consent to the use of cookies in accordance with your current browser settings. Read more.
close
Please enter your birth date to continue
submit
x